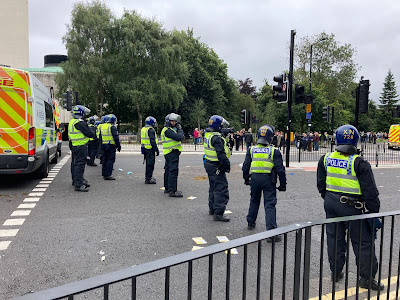 An anti-vaxxer slapped a police horse during a protest in Newcastle City Centre.

The court heard that Warren was present during an anti-vax protest outside Newcastle Civic Centre on Sunday, 29th August 2021.

Ohmar Ahmad, prosecuting, said: "The Crown's case is that the defendant attended the protest in Newcastle last year and during this protest took leadership and used a megaphone to direct protesters away from the allocated area."

The 150-strong crowd were initially peaceful, but as time progressed they became more "animated, threatening and intimidating". Giving evidence, Sergeant Coates said: "The defendant was trying to get past me and Patronus. When he walked past he threatened to knock Patronus out. He then assaulted the horse. He hit Patronus's back end, to the left hand side, with his flat hand."

Sergeant Coates described how the assault had startled Patronus and he had to concentrate on keeping the animal stationary.

When asked why he thought Warren had struck Patronus, Sergeant Coates responded: "I think he intended for the horse to bolt with me on it."

The court also heard from PC Lucy Adair, who was riding Penelope on that day. She described how Warren was inciting the protestors to break through the line of police officers. 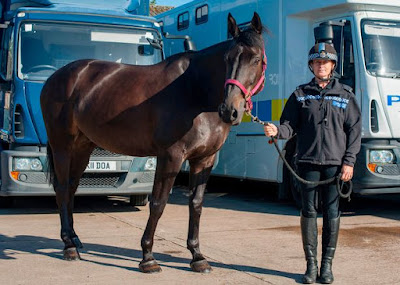 PC Adair said: "I bent down and said to the defendant that he couldn't go that way. The horse turned her head at the same time and the defendant got more agitated and shoved the horse's face and said "Get your fucking horse away from me".

"He didn't stop, he carried on walking. At that point, [another officer] on a horse called Pluto got hold of the defendant's rucksack to try and get him detained."

The officer described how the crowd encircled Pluto and his rider, which allowed Warren the opportunity to wriggle free.

Asked how Penelope reacted to being struck by Warren, PC Adair replied: "She was startled and taken aback. When you raise your hand quickly at a horse, it doesn't matter how much training you give them, they will always get a fright."

Warren conceded that he had made contact with Patronus, but claims it was a defensive push that didn't cause the animal any suffering or distress. He denied making any contact with Penelope.

Giving evidence, Warren described how Patronus had "pecked" his head several times, which left him shocked and he viewed as an "attack" on him. 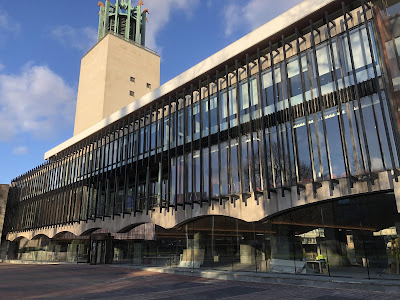 "I stepped to my right and pushed the horse's hip and bum area to get the horse and officer away from me to get past the horse."

Warren estimated that on a scale of 1-to-10, the force of his push had been a 4.

In closing Sophie Land, acting for Warren, said: "We have accepted that my client travelled up from London to Newcastle to attend the protest. He gave evidence that he was not the organiser of the protest and didn't know who they were.

"He did not know where the designated protest area was. My client describes that things were starting to get more heated and he felt that this was not safe and wanted to get people to an open area where they could gather, so his actions walking past the police horses were reasonable."

She continued: "As a former boxer who would understand the force used on various punches, he would have the best understanding of the force used. He was the person who agreed there was some force was used but not at the level that would cause the horse to suffer." 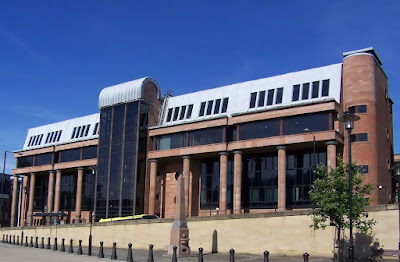 DJ Currer rejected Warren's claim that he had pushed Patronus defensively, adding that he was sure the strike caused the animal pain and distress.

He said: "I am sure that the defendant was acting as a leader in this protest. It is clear from his behaviour in the CCTV footage he led others from the council chamber and across Barras Bridge and did this in an attempt to break police lines.

"I am sure that in anger and frustration he lashed out at police horse Patronus. I am sure it was a full-force blow."

The Judge ordered a pre-sentence report.

Warren was granted unconditional bail until his sentencing hearing at the same court on Friday, 12th August 2022. 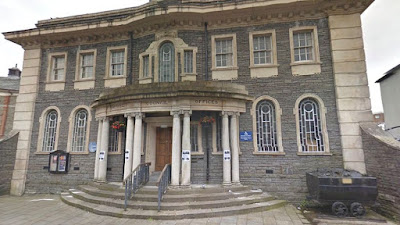 The former clerk fleeced at least £200,000 from Maesteg Town Council.

Margaret Buckley, 76, of Llwydarth Road, Maesteg, admitted a charge of fraud by abuse of position when she appeared at Cardiff Magistrates' Court on Thursday, 30th June 2022.

Her conviction comes a day after news that Joanne Wills, the former clerk of Chinnor and Towersley Parish Councils in Oxfordshire, was jailed for four years for defrauding £162,000 from those bodies.

Fraud by abuse of position is an offence under section 4 of the Fraud Act 2006. It has a maximum penalty of 12 months' custody on summary conviction; 10 years' custody on conviction on indictment.

Magistrates heard that Buckley, who walked into court with the aid of a walking frame, started as a deputy clerk at Maesteg Town Council in 2003 before being promoted to clerk in 2016 when her predecessor retired. She then held the position until she retired in 2020.

Simone Walsh, prosecuting, outlined the circumstances: "From 2015 to 2020 she made out over 120 cheques from Maesteg Town Council to herself, her daughter, the Our Lady & St Patrick Church, and the church flower group without the knowledge of the council. She made full admissions in an interview. 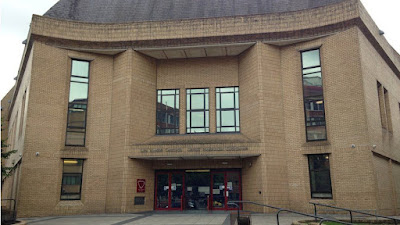 "Ms Buckley abused her position of power by defrauding her long-term employer and carried out the offence over a significant period of time. The sentence is beyond the remit of this court due to the amount of money involved in this case."

John McCarthy, acting for Buckley, added: "There may be an issue with the amount but she accepts it was at least £200,000. We will see what happens in Crown Court."

Magistrates agreed that the circumstances of the offence meant their sentencing powers were insufficient. Accordingly, they sent the matter to Cardiff Crown Court for completion.

Magistrates ordered the preparation of a pre-sentence report to assist the Judge in sentencing.

Buckley was granted unconditional bail until her sentencing at Cardiff Crown Court on Thursday, 14th July 2022.

Maesteg is a small town with a population of just under 20,000. By her own admission, Buckley has just picked each of their pockets to the tune of £10.

An Isle of Wight man has become the first in England and Wales to be convicted of the new offence of non-fatal strangulation.

Joshua James Hunt, 26, of Petticoat Lane, Newport, admitted charges of non-fatal strangulation and breaching a restraining order when he appeared at Isle of Wight Magistrates' Court on Thursday, 24th June 2022.

The provision only came into force on 7th June 2022.

Magistrates heard that the offence took place in the Little London area of Newport just before midnight on Friday, 17th June 2022.

Hunt grabbed the woman by the throat. She struggled to free herself, with Hunt letting go when he noticed members of the public nearby. 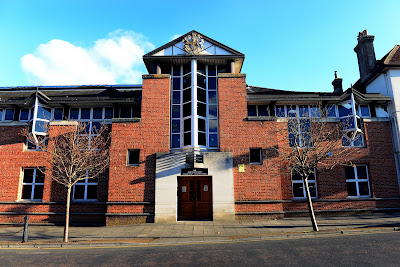 He then strangled the woman again, to such an extent that she was unable to breathe. Fortunately members of the public intervened, separated the pair and the police were called.

The woman's arms were bruised in the assault.

Hunt was arrested and charged with the new offence.

"Tackling domestic abuse, and those who perpetrate it, is a priority for us and we welcome this conviction.

"This was a shocking and violent assault, and I am pleased that such swift action has been taken against the man responsible.

"I am grateful to PC James White and the team who led the investigation for recognising, interpreting and applying this new legislation so quickly to ensure the most robust response was undertaken when dealing with this awful crime.

"The legislation under which Hunt was charged only came into effect on 7th June this year. We hope this conviction reassures the public that Hampshire Constabulary and our partners will take every proactive effort in targeting domestic abuse perpetrators, applying new legislation swiftly, and protecting vulnerable victims.

"We would urge anyone who feels they are a victim of domestic abuse not to suffer in silence. Please call the police or a domestic abuse support service. Your calls will be taken seriously." 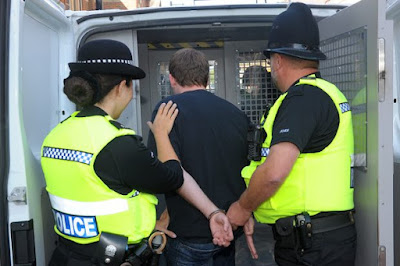 Louise Holmes, CPS Wessex Senior District Crown Prosecutor and Domestic Abuse Lead, said: "Domestic abuse has a devastating impact on victims and their family - this new law gives prosecutors more charging powers to protect people from violent abusers and I am pleased to see it being used already to bring offenders to justice.

"Our prosecutors have received training on the new non-fatal strangulation and non-fatal suffocation offences. We are ready to apply the new legislation where there is sufficient evidence and our legal test is met.

"We are working closely with the police to make sure these horrendous crimes are identified from the outset."

Magistrates remanded Hunt in custody until his sentencing on Tuesday, 23rd August 2022.

A terrierman for the East Essex Hunt illegally used a dog to drive a fox from underground before slowly stabbing it to death with a garden fork.

Paul O'Shea, 49, of Mount Bures, Essex, admitted charges of hunting a wild mammal with a dog and causing unnecessary suffering to a protected animal when he appeared at Chelmsford Magistrates' Court on Wednesday, 22nd June 2022.

The prosecution withdrew a charge of hunting a wild mammal with a dog against a 16-year-old girl.

The pair attended Great Monks Wood near Coggleshall on the early evening of Saturday, 4th December 2021. 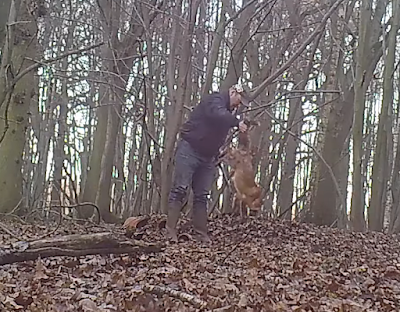 Members of an anti-hunt group, the North London Hunt Sabs, had positioned covert cameras overlooking an artificial fox earth constructed at the site.

The damning footage clearly shows the pair arriving and a terrier being released underground by the girl.

A short while later a fox was driven up to the surface, where it became entangled in a net. The terrier had a tight hold of the fox at this stage.

O'Shea could then be seen lifting the fox by its tail and untangling the net from around its body. He passed the terrier back to the girl, who then walked out of camera shot.

Still holding the fox by its tail, O'Shea took a garden fork with his left hand and walked the distressed animal to a nearby tree trunk. Supporting the fox against the trunk of a tree, he then thrust the fork through its body.

The fox was seen writhing in pain as O'Shea manoeuvred it to the ground and stabbed it for a second time, this time jiggling the prongs for maximum effect. 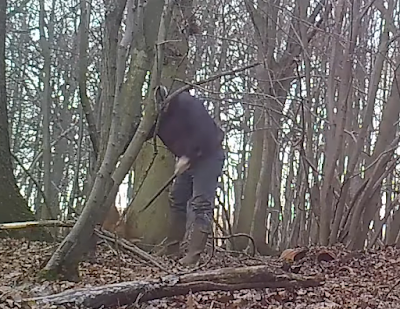 He again picked up the fox by its tail, its legs kicking as the last bit of life drained from its helpless body.

The pair were then seen to "reset" the fox earth, no doubt in the hope of luring further foxes to their death.

North London Hunt Sabs passed the footage to Rupert Evelyn of ITV News, who subsequently reported on it.

Magistrates' ordered a pre-sentence report. They warned O'Shea that the section 4 offence was imprisonable and all sentencing options remained open.

O'Shea was granted unconditional bail until his sentencing at the same court on Monday, 1st August 2022.

The relevant sentencing guideline can be viewed here. Considering the information available it is likely this offence would be considered one of higher culpability and greater harm, giving a starting point that crosses the custody threshold.

This is a breaking story, so we shall update this article as and when more information is available.

It is not our place to be offering any sort of personalised legal advice or opinion, so please don't ask.
Follow @magistratesblog