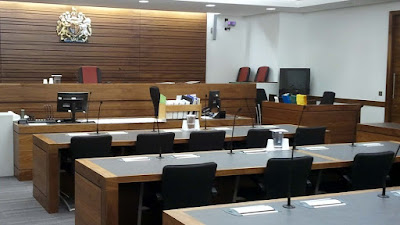 Reasons to become a Magistrate
Becoming a Magistrate is a unique way of serving the local community. People have many different reasons for applying, but this sense of service seems to be one of the most common. Being a Magistrate is also a good way of seeing how the criminal justice system works, improving a person's communication and decision making skills and gaining a greater understanding of issues affecting the local community.


The commitment involved
A significant time commitment is required to be an effective Magistrate. The minimum expectation is that every Magistrate will sit the equivalent of 13 full days a year. Those sittings could be full days, half days or a combination of the two. The overwhelming majority of Magistrates sit far in excess of that minimum. In my area it is not uncommon for Magistrates to sit every week and complete 50 or more full sitting days a year. During the first year after appointment a new Magistrate's workload is likely to be heavier than normal, because they need to complete a series of mentored sittings and training days.


Magistrates are not paid for their judicial duties, but can claim allowances to cover their travel, subsistence and any loss of earnings incurred as a result. Details of the current rates can be viewed on the Magistrates Association website.


It should also be mentioned that any newly appointed Magistrate will be expected to sit at several different court houses, which may involve a considerable amount of travel. Sitting at different venues allows a Magistrate to gain experience of a wider variety of the court's work.


Eligibility
The six key qualities
There are six key qualities that all Magistrates are expected to demonstrate. These will be assessed at every stage of the application process. The six qualities are:
Prior to application
There is an expectation that Magistrate candidates will have undertaken at least one, preferably several, court visits prior to submitting their application form. The local Advisory Committee - the body tasked with recruiting, selecting and recommending potential Magistrates - is not obliged to consider applications from anyone who has not undertaken these visits.


The interview will begin and conclude with the candidate being asked the good character background question: "Is there anything in your private or working life, past or present, or the lives of your family or friends, which could damage your credibility as a Magistrate if it became known to the public?"


An affirmative answer does not necessarily bar a candidate from progressing to a second stage interview, but will definitely be explored further.


The interview will normally be conducted by three members of the Advisory Committee, of which at least one of whom will be a serving Magistrate and another a lay (non-Magistrate) member. It will normally take place at a court building. The interview panel will ask a series of prepared questions and record the responses given by the candidate. At the end of the interview, they will score the candidate against strict criteria set by the Ministry of Justice. In theory a candidate that weakly demonstrates the six key qualities can progress to a second stage interview. In practice vacancies will be limited and only the highest scoring candidates will go forward.


Second stage interview
If it has not already done so, the Advisory Committee will request references prior to the second stage interview. Candidates will be asked to provide at least three forms of identification to enable their identity to be confirmed. This will include at least one of the following:
Plus at least one of the following:
The purpose of the second interview is to make a preliminary assessment of the candidate's judicial aptitude. Any issues arising from the candidate's references will also be explored. The candidate will be given half an hour or so to complete two exercises, which will then form the basis of discussion during the interview. Candidates are allowed to refer to their notes and the text of the exercises during the interview. The two exercises are:
The second stage interview is likely to include questions that test the candidate's understanding of the causes of crime, purpose of sentencing and criminal justice system. Some of these questions will be asked in relation to the local area.


The interview will begin and conclude with the good character background question.


Appointment
After the second stage interview the panel will decide whether or not to recommend the candidate for appointment as a Magistrate. The panel's decision will need to be ratified by the full Advisory Committee, before the Committee sends the recommendation to the Ministry of Justice. The Senior Presiding Judge has the final decision over which recommendations he/she accepts, so it could be several months before the candidate learns the final outcome of their application.


New Magistrates take the judicial oath at a swearing in ceremony before they embark on their first court sitting.


Further Reading
We have covered the most important points of the application and interview process above, but there are several books exploring these issues in greater depth: